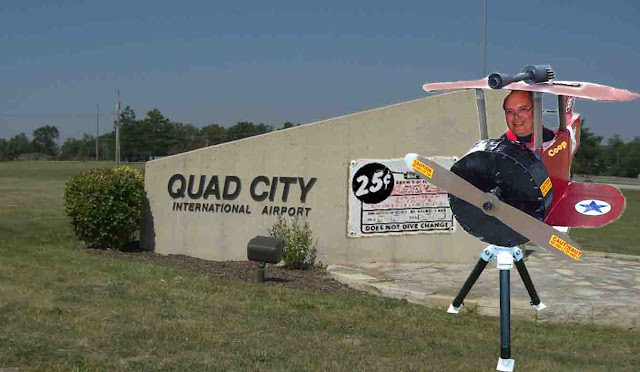 Dave was always the first one on the airplane ride,
which helped finance the QC Airport in Moline.

Today is Dave Coopman's birthday. Say hello to him on Facebook.

He mentioned that the proof-sheets for his new book on Quad-City aviation had just arrived. That always means more work, more corrections, but also the incipient thrill of a new book coming out.

We all have a great deal of respect for Dave's work in preserving Quad-City history. To master the details and present them in an interesting form is quite a challenge. Many historians are not up to the task. They preserve their notecards and print every single one of them, in the name of history.

Dave has given me a new respect for many different Quad-City pioneers and figures, and a much better understanding of our hometown area.

Look up his other books and order them. Each one is worth reading and keeping.
Posted by Ichabod the Glory Has Departed at 11:39 AM 0 comments

Nazek was our foreign exchange student. Everyone liked her. She just wrote to Mary Parsons Caisley:

It so happened that I left Egypt on the first day of the troubles to visit my  daughter who lives in the Gulf with her husband and two kids. No one ever thought that the protests would take such a scale. The disaffections of the last ten years have been many, and although we are a bit dazed by what has happened, we are all proud of the young, secular Egyptians who started it all. I should be going home in two days--I have spent the last ten days worried about my husband and other daughter who were trapped at home in Alex. and like all other Egyptians, I have no idea what the future holds, but I will live and die in Egypt and pray to God that He will keep Egypt safe from harm.

Nazek Fahmy AFS, Class of 65
Posted by Ichabod the Glory Has Departed at 12:56 PM 0 comments 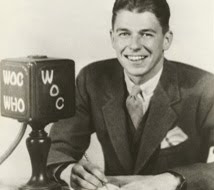 Reagan came back as president to pose at the WOC mike and broadcast.
Dave Coopman wrote about this event in his book on WOC Radio.

Dutch Reagan was born not too far from Moline - Tampico, Illinois, only 45 miles away. On this day, 100 years ago, it was also snowing furiously.

Reagan grew up in Dixon, Illinois and graduated from Eureka College in Eureka, Illinois, 1932.

WOC Radio, started by the Palmer (School of Chiropractic) family, hired him as an announcer. We take radio for granted now, but the Palmers were pioneers in introducing radio to the area.

Facebook is the technological rage now, and Moline High graduate John Getz plays the lawyer in the new movie about Facebook.
Posted by Ichabod the Glory Has Departed at 5:04 AM 0 comments

Email ThisBlogThis!Share to TwitterShare to FacebookShare to Pinterest
Labels: Reagan

A Memorial Mass will be 11:30 a.m. Monday at Our Lady of Lourdes Catholic Church, 1506 Brown Street, Bettendorf. Visitation is from 3 to 6 p.m. Sunday at Esterdahl Mortuary & Crematory Ltd., 6601 38th Avenue, Moline. Cremation rites have been accorded. In lieu of flowers, memorials may be made to The Leukemia and Lymphoma Society.

Tom was born March 2, 1948, in Moline, the son of Albert and Rachel (Vander Vennet) DeSmet. He married his “high school sweetheart” Barbara Warfield on April 28, 1973, at Christ the King Catholic Church in Moline.

Tom was a territory manager at Lifetouch for 23 years, retiring in 2005. He previously worked 17 years at International Harvester. Tom served four years in the U.S. Air Force. He was a 1966 graduate of Moline High School and graduated from Augustana College with honors. Tom was a member of Our Lady of Lourdes Catholic Church in Bettendorf, where he was an usher at the 8:30 a.m. Mass, and enjoyed breakfast afterwards with friends. He was an avid fan of the Iowa Hawkeyes, Chicago Cubs and Chicago Bears. Tom loved to travel with Barb, his family and the Lifetouch Alumni Club. He also volunteered for Meals On Wheels with his wife. Tom always looked forward to Friday pizza night with the gang and Saturday morning donuts will never be the same. His greatest joy of all was being “Papa” to his grandchildren. He was loved by so many and will truly be missed.

Online condolences may be expressed to Tom’s family by visiting his obituary at www.esterdahl.com.
Posted by Ichabod the Glory Has Departed at 3:38 AM 0 comments 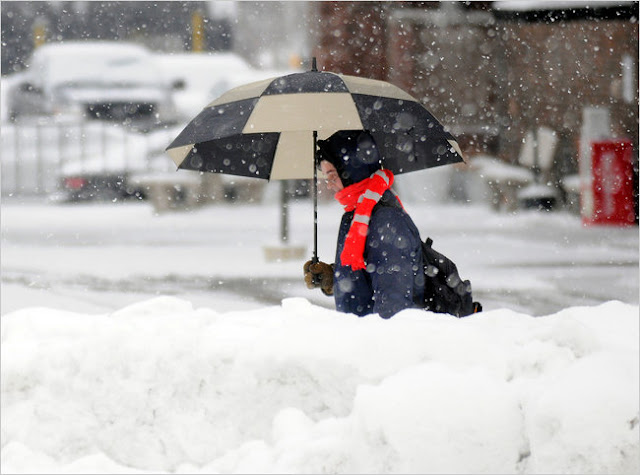 "Rex Benz of Moline, Ill., did not let conditions stop him from his job search recently."


ST. LOUIS — A sprawling winter storm stretching from the Southwest through the Midwest halted thousands of flights and created treacherous driving conditions on Tuesday, with blizzards dumping snow on ice-covered roads and knocking out power lines.

Missouri residents were hunkered down for what forecasters said could be the worst winter storm to hit the region in 30 years. A freezing rain fell here Monday night, covering the city in a sheath of ice before blizzard conditions arrived.

“We’ve seen tremendous amounts of snow since daybreak, already 6 to 7 inches in some portions of the state,” said Fred Glass, a meteorologist with the National Weather Service in St. Charles, Mo. “Were calling for 18 to 21 inches in Jefferson City. That would put this in the top two or there storms since we’ve been keeping records.”

Mr. Glass, who predicted winds of up to 40 miles an hour, added: “The last component of this storm is that the winds are really going to start cranking up and get pretty gusty tonight and tomorrow. That ice on the lines and on tree limbs is pretty heavy, and with those kind of winds we could see a lot of lines come down. So it’s likely we’ll see some power outages.”

By late morning, Ameren, a utility that services Illinois and Missouri, reported nearly 17,000 power failures in Illinois but only 135 in Missouri. Concerned about the storm’s severity, the utility’s Web site says it was in “storm mode” and had brought in more than 800 external linemen from as far away as Wisconsin and Tennessee.

Meanwhile, the ice storm prompted St. Louis Public Schools to cancel classes on Tuesday, and officials at Lambert-St. Louis International Airport said they had canceled more than 400 flights by early Tuesday morning.
Airports from Dallas to New York were scrambling. Dallas-Fort Worth International Airport was closed Tuesday morning. In Chicago, some snow had fallen overnight, but the worst of the storm was expected to hit on Tuesday afternoon. But more than 1,000 flights were already canceled at O’Hare in advance of the storm.

Road conditions were treacherous in the St. Louis area. Tim Hull, a captain with the Missouri Highway Patrol, said that black ice had already caused the death of a 55-year-old woman who was killed early Tuesday morning in a head-on collision after she lost control of her vehicle near Rolla, Mo., about 100 miles southwest of St. Louis.

Hundreds of schools in the Chicago area announced they would close early. Chicago election officials said early voting in the city’s race to replace Mayor Richard M. Daley would be suspended on Wednesday except for at one downtown location. In Springfield, both chambers of the state Legislature canceled sessions.

The National Weather Service early Tuesday predicted that Chicago would receive as much as 18 inches of snow. The combination of strong winds and heavy snow could cause prolonged power failures, the weather service said.
Posted by Ichabod the Glory Has Departed at 10:48 AM 0 comments