Posted by Ichabod the Glory Has Departed at 7:52 AM 0 comments 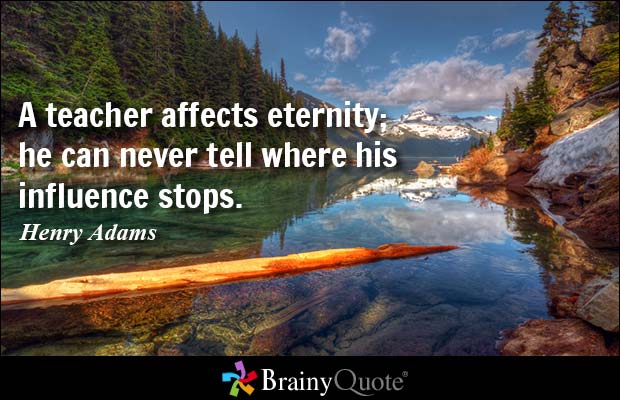 Here are memories from the Coolidge Facebook page, posted with the family's permission -

Hello all. I am new to this group. While I am not an alumnus of the school, my grandfather taught there. Sam Etzel. My family and I enjoy hearing various stories about Sam. I will pass them on to all of us around the nation. Also I saw my aunt, Linda, mentioned. My dad is Gerald. I do want to thank a family friend for introducing me to your group.

I can even offer a story of my own. While Sam did not formally teach me in the classroom, I did have a variety of teachers who had him or worked with him. One particular industrial arts teacher observed some of my behavior in his classroom. He called me over and said, "If your grandpa Sam was teaching this class, he would have kicked you out a while ago." There you have it.

Sam was a very nice man and our neighbor, he introduced me to kohlrabi and when I liked it, he always left several on our porch for me to eat from his very large garden.

I watched Sam grab a kid by the collar and throw him out the door and bounced him off the far side hallway lockers. He was an excellent teacher who would not tolerate any foolishness...he knew his job and did it well...I liked him a lot....taught me many skills I still use to this day. His daughter Linda was a classmate, really sweet gal.

Greg, I knew your Dad as a teen. We were in the same youth group at ALDERSGATE Methodist church on 41 st street across from MHS.

Also knew your grandfather Sam. Two of my brothers worked for him when he built a couple of houses on 26th Ave. behind MHS. He taught them in his classes but also taught them a great deal as his helpers. One of those brothers built a home of his own years later and had skills the average man didn’t thanks to his time with Sam Ethel. He was a tough teacher in both class and on the job but was liked by his students.

Jan Randall you obviously know I come from a line of trouble makers. Lol.

I think that’s why Sam Etzel hired my two brothers as they seemed to always find trouble.

Russ Minard so was I

My uncle was a carpenter from the late 30s ( I think) to the mid 60s. I told him about my wood shop class with Sam Etzel. He smiled and said, “Oh, Safety Sam.”

I’ve always wondered, was Sam a journeyman carpenter who trained apprentices? Or was he a shop teacher way back in the 30s when my uncle would have taken a shop course at the old Manual Arts building near the old high school?

Craig Sanders good question. I would need to check on that. I know he taught a long time. Hopefully I can get you some better feedback when I talk to my dad.

Craig Sanders my grandpa earned a Master's degree in Industrial Arts from Iowa State. So he was most likely and journeyman carpenter. And he taught it as well.

Greg Etzel wow! Sam had some impressive credentials. I’m thinking his students numbered in the thousands.

Craig Sanders from what I understand he earned the Masters and ended up with nearly enough for a terminal degree. He and my dad built several homes in the QC area. Two of them are in the family still. He would have been about 113 years old now.

Tell Linda that I said hi. In about 7th grade, her dad, Sam, made a lucite pin, with a rose cut into it, and Linda brought it for me. Tell her that I still have it. I always thought it was wonderful.

When I saw your last name, I thought, "Has to be Etzel's kin." I remember him especially. No teacher in shop had any hope for my future in their craft, but I have employed many of their star pupils.

We built footstools and upholstered them. I still have the stool and have been an upholsterer for 47 years.

Michael Collins I still have my pencil holder. The rest i have no idea what happened..

I had him back in the 50s for woodworking and I think also drafting. Remember his " gather around for a demonstration "

I really enjoyed shop classes at Coolidge, and use those skills to this day. Sam was my teacher around 1963 or 64. I still have a lamp I made in his class. I remember trying to work with very used sand paper. He made me keep sanding until the pine had a sheen, even without varnish. He was a stickler for taking care of our tools. I’m grateful for what I learned from him.

Did he, also teach drivers ed??

Betty Spore Boon my dad says Sam may have taught driver's Ed a little. Maybe more of a sub.

Safety Sam...saved my fingers many times..

I had him for wood shop. I was in 10th grade and the class was so full that half was sent over to Coolidge.

Donavon Hardesty my dad is only 19 years older than me so he had Sam at Coolidge too.

I still have my pump handle lamp that I made in Sam's woodshop class in1962.

Doug Dailing
Craig Sanders I still have mine and will be refinishing it soon.
Greg Etzel
Author
Looks nice!!
Todd Sanders
I remember that lamp!!!
Craig Sanders
Todd Sanders it was an integral part of our clubhouse furniture.
Craig Sanders
As was this bookcase that Dad made. Handmade family items are treasures. 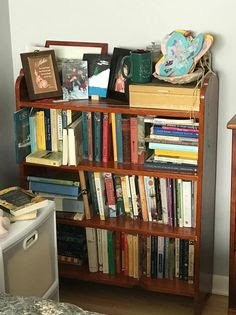 Craig Sanders Wasn’t that in our bedroom?

Todd Sanders yep and the clubhouse.

Michael Collins those stools must have been for the 9th graders who took a semester-long class. Nice heirloom and memory.

Craig Sanders made mine in 8th grade. Had no shop classes after that!

I remember your Aunt Linda from orchestra 64-65. I was in 7th grade and played cello.

Doug Dailing there is a lot of music in our family. Linda, her husband and their kids. Sam did a lot with music. My mom and dad to an extent. I earned multiple degrees in music and my children are all very musical. I married into a musical family.

I got sent "up to the office" a favorite saying of his a few times!

One time, in woodshop class, cut a board to short, checked with SAM, FIND wood stretcher machine, NEVER found machine.

I remember a pencil holder. Is this very quick sketch familiar to anyone? I remember learning how to use a chisel and saw to make a mortise and tenon joint to hold the vertical piece in place. I thought that was so ingenious.

Craig Sanders my brothers made those in the 50’s.

Mike that’s cool that you still have your foot stool, it really meant something to you 👍 I still have my dresser hope chest that all the girls got. I will have it until the day I die. I also have and display the piece of pottery that had to be completed by 2 o’clock for my son to graduate I will also have that til the day I die and hope he will take it from there and appreciate and enjoy the meaning of it. 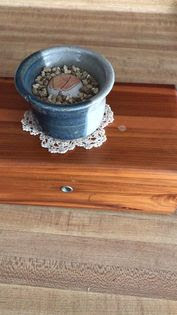 Katherine Kay Polito I still have my hope chest too. I found it when I was packing to move and my boys wanted to know what was in it. Luckily I couldn't find the key at that time. Later, when I found the key, I found my diary about my college boyfriends. I haven't shown it to them yet!

Nancy Russell Fun to find stuff like that. To take us back to those wonderful days . Oh what fun! 🙏🏻🙏🏻🙏🏻

I remember Sam 2 other arts teachers. They were characters. Sam once asked the Boys during class. OK Boys. “Who just cut the cheese”. Class laughter followed!!!

I always enjoyed his class.Fun

Randy Komadino
He always took 5 minutes to tell a life story or experience! He was an ex boxer so little challenges were always in the game.... once he was shaking his foot and told me look at this... I looked down and POW.... slap to my head ! He told me never look anywhere except their eyes! RIP SAM ETZEL my lifelong friend and mentor!
Greg Etzel
Author
Randy Komadino I definitely heard about him boxing.
Kathy Colberg-Holmgren
Hi Greg, I was never a student of Sam Etzel but he was my neighbor on 26 Av. The house I grew up in was torn down & is now rebuilt for citizens for disabilities. I remember playing With Linda. In the winter your Grandpa Would give us a ride to School.
Craig Sanders
Mr. Etzel also taught Mechanical Drawing in the “Electricity” room across the hall from the wood shop. I loved that class.
My dad was an engineer/draftsman for John Deere, so I put maximum care into the class. I realized how hard my dad’s job was when I compared his excellent work to mine.
We made a booklet in Sam’s class, and I finally found it in my attic. 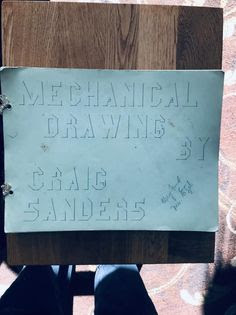 I made the same book and still have it ... that Drafting and Design class was AWESOME.... Mr Etzel at Coolidge Jr. High!

He was a great wood shop teacher. If you brought up a project to him you thought was ‘done’, and he thought you could make it better, he would critique it and give it back to you to work on it more. If it was truly finished in his eyes, he would give you an ‘A’. My mom used the wooden salad tools I made in Mr. Etzel’s class for years! I learned a lot from him.

Glad to have you join us. You are very welcome.

I was able to talk a little bit with my mom and dad about these memories and questions. They can see them. So hoping to get some more info on here. There are various items around our homes that are those projects. If I am really ambitious I can post some pictures of those things as well as others Sam made.

Posted by Ichabod the Glory Has Departed at 1:53 AM 0 comments