The Dairy Queen Legend Involving Moline:
And My Small Part


GJ,, The Moline DQ references in this article, Mildred's ice creamery, was owned and operated by my grandfather and grandmother, CR and Mildred Medd. The store was across the street from Wheelocks Drug store and four doors up from present day Casey's! He first DQ store in Moline was opened by CR Medd in 1941 on 4 th Ave, This store set the standard for the famous flat top DQ store design. Medd's , Duke's, and Noble's were names spoken ofmoften during the early years, not much on McCollughs!

The Medd brothers, Dick, Ralph, Ronnie, all from Moline, designed and have the patent on the Blizzard DQ machine and in particular the mixing blade. International DQ found out about the candied malts being made at the Moline DQ's when the brothers took the candied malt mixing machine to the St Louis, Missouri DQ convention in the mid 1970s. IDQ signed agreements with the Medd brothers for the rights to use the machine, now being built by Duke and Sons, East Moline. Also, the first mint Dilly Bar came from a Moline DQ store in 1977/1978. Moline has history!

After a few years, however, Grandpa McCullough was still thinking about soft ice cream, and he convinced his son that they should find out whether or not the product would capture people's tastebuds. They asked one of their customers, Sherb Noble, if he would arrange a special offering of soft ice cream at his store in Kankakee, Illinois. With an advertisement of 'All you can eat for 10 cents,' the sale was held in early August 1938. Using an ordinary commercial batch freezer, the men put the soft ice cream into five gallon containers and then hand-dipped the product into 16-ounce cups. In two hours, Noble and the McCulloughs dished out over 1,600 servings. A short time later, another sale of soft ice cream was offered at Mildred's Ice Cream Shop in Moline. The response from the public was the same. With such overwhelming success, the McCulloughs began searching for the type of freezer that would make dispensing soft ice cream a reality. Funding Universe

Ice cream manufacturers have always known that ice cream tasted best when it was "soft frozen" at approximately 23º F. When ice cream was served at near 0º F, it would numb the taste buds, making the product less flavorful. Ice cream manufacturers also knew that if there was ever going to be a way to serve a "soft frozen" product to the public, a new kind of freezer would have to be invented.

In 1938, near Moline, IL, two ice cream manufacturers, J.F. "Grandpa" McCullough and his son, Alex, decided to find out how the public would react to a "soft frozen" ice cream product.

The McCulloughs enlisted the help of one of their customers - Sherb Noble who owned an ice cream retail shop in Kankakee, IL. They decided to have a sale. They called it the "All the ice cream you can eat for only 10 cents" sale. The sale was held on August 4, 1938. They dished out over 1,600 servings in about two hours, and people were lined up and down the block. The McCulloughs now knew that the idea of selling a "soft frozen" product to the public had a lot of potential. Now, all they needed was to develop a freezer that could continuously dispense a "soft frozen" product.

The solution to their freezer problem came when "Grandpa" McCullough saw an ad in the Chicago-Tribune which advertised a "continuous freezer that dispensed frozen custard". The ad was placed by Harry M. Oltz of Hammond, IN, who owned a patent on his machine. The McColloughs and Oltz got together and on July 31, 1939, signed the Agreement that would launch an industry.

The McColloughs obtained the manufacturing rights to the Oltz patent. However, the Oltz Freezer was crude and difficult to operate because it used ice and salt to freeze the ice cream chamber. The McCulloughs knew that a freezer needed to be built which would incorporate mechanical refrigeration. So, in the fall of 1939, the McCulloughs proceeded to have a prototype freezer built that would incorporate mechanical refrigeration.

In January 1940, the prototype freezer was ready and was installed in "Grandpa" McCullough's basement for testing. It was during this time that "Grandpa" McCullough discovered that "soft frozen" ice cream dispensed by this new freezer tasted best when it had only 5 percent butterfat rather than the standard 10 percent or more butterfat used for regular ice cream. In fact, this newly developed "soft frozen" product was not ice cream at all, but rather ice milk. The experiments also concluded that the new "soft frozen" ice milk would taste creamier, smoother, and would hold its shape best when served at 18º F.

By Spring of 1940, the McCulloughs had finished their testing and then ordered four freezers to be built to their new specifications. The first two machines were finished in May 1940 and were slated to go to Sherb Noble who had found a location in Joliet, IL, to start the new business which would serve the new "soft frozen" ice milk. The store was jointly owned by the McCulloughs and Noble but the new business could not open its doors until it had a name.

Since "Grandpa" McCullough had always referred to the cow as the "Queen of the Dairy Business," and consequently, referred to his "soft frozen" product as the "Queen of Dairy Products," it was decided to call the store and the product Dairy Queen. The Joliet store opened on June 22, 1940. The second store opened in Moline, IL, on April 1, 1941 and a week later, the third store (Sherb Noble's second) opened in Aurora, IL. World War II sharply curtailed the expansion of Dairy Queen. In fact, at the end of the war in 1945, there were only eight Dairy Queen stores in operation.

In 1948, Axene arranged for 35 store owners and territory operators to meet in Minneapolis with the purpose of establishing a national organization. In December of the same year, the first official meeting of the newly incorporated Dairy Queen National Trade Association (DQNTA) was held in Davenport, Iowa. Organized as a not-for-profit corporation, with C.R. Medd as its first president, national offices were soon established in the city.

A very popular Dairy Queen treat today is the Blizzard Treat, which is ice cream with pieces of cookies, brownies or candy blended in. It has been a staple on the menu since its introduction in 1985, a year in which Dairy Queen sold 175 million Blizzards.[4]. The Blizzard was invented and copyrighted by Richard, Ronald, and Ralph Medd of Iowa. It is traditionally served upside down to prove the thickness. 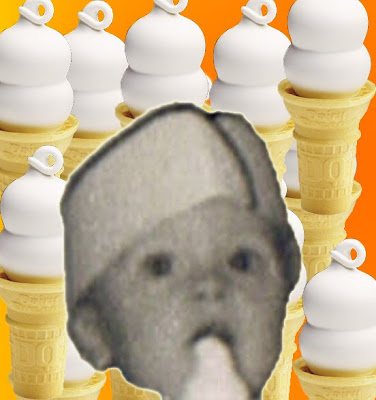 This enlargement shows that while others were posing with a cone, I was pursuing it.

Brenda Roggendorf commented on your link:

"Hi Greg, H C Duke & Sons of East Moline are the makers of the Dairy Queen Machines. For years my son was one of the welders that helped make the machines. "

GJ - Jim Medd, MHS 66, worked at the family Medd-O-Lane. A classmate says he ran one before moving to Florida. Details are welcome.

We can be doubly proud of DQ's Moline connection and the Blizzard's origin in our fair city.

MHS Hall of Fame potential? I think so. Our family loves to go there and it is an American institution.

The pursuit of ice cream continues:

Posted by Ichabod the Glory Has Departed at 7:11 PM