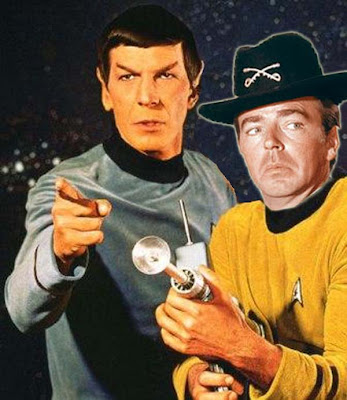 When his hitch was up in 1955, Ken was looking for the logical next move. "My sergeant in Atlanta was Leonard Nimoy, from ‘Star Trek,’" Ken recalls. "Leonard said, ‘You really ought to contact some people on the coast since you’re going back out there.’ He set it up and I got a screen test. I didn’t get the job but it got me to California." (The film was Francis in the Haunted House and at the last minute Mickey Rooney got the job of essentially succeeding Donald O’Connor in what turned out to be the last of the "Francis the Talking Mule" films.)
Ken Berry Official Website
Posted by Ichabod the Glory Has Departed at 6:35 PM 0 comments

Posted by Ichabod the Glory Has Departed at 3:33 PM 0 comments

Marine Veteran, Michael Blaser, painted this cover for us. He is a member of VVA Quad CitiesChapter 299.

Michael Blaser is an amazing artist from the Quad Cities. I am honored to have been a classmate of his class of 1965 Moline HS. He is known for great marine works.

Commentary by the Artist
So, now you have seen a cross section of what I have done with my life and talents. I hope it pleases your profile of what is good in the painted arts. I have painted river ports, riverboats, deep water ports and ocean going vessels all my life. In the last few years I've been working on commissions from patrons who like how I handle a brush. I may have an insight that just may create an itch for the collector that only I can scratch. If I collected art I would want to work with an artist that had a defined passion to do a certain thing. I'd give him the money he needs, then stand back and watch him go that extra mile. Often, people pay me to paint what they want. This works to a certain level, but my finest works come from an idea that I am on fire to paint. If you'll take the time to read on I think that fire will warm your imagination and hopefully you will call me and then we can talk over in detail about why I have this particular fire to paint.

When you really look at a painting, you can see through the minds eye of the painter. On the same level creative writers craft an image that frees your imagination and places you inside a literary art work so fresh that you feel the warmth of the sun or smell the breeze blowing over the river. The art collector, the reader and the historian spend lifetimes looking for the treasures scattered among the weeds of the ages. Such an American treasure was Captain Frederick Way Jr. He was a unique American riverboat captain, writer and historian. I have excerpted for you just in one paragraph he wrote about a steamboat named the QUEEN CITY. She ran the Ohio river during the first third of the 20th Century. I would like you to read this and stay with me while I tie the threads into a fine rope for you.

"Your scribe fell for the wiles of the QUEEN CITY in 1911 standing in the forward end of the cabin gazing aft at her multitude of repititions; repitition of doors, of shining brass oil lamps in their swinging brackets, of overhead lights coming from twined oak leaves of metal, of chairs soldiered in parade, and her dining tables the same way - all of these things as trim as West Point cadets, sweeping in a dip downward to the mid-ship gangways, then up again to the immense mirror in the distance - an unbelievable distance - twice as wonderful as anything military; a person could wear out his eyes looking for a single straight line; there wasn't one anywhere; all was cadence and curve, an immense arc. A lady at the grand piano played. She sang in a dusky voice "Oh Beautiful Lady" and "Chocolate Soldier." She had too much powder and paint for my mother's standards, but I thought she was a blessed angel, and shall expect all honest angels to resemble her in the Hereafter. I was 10 years old when this indelible tattoo creased my imagination. The QUEEN CITY did this to adults as well, so I learned later".

There are literary pearls among his books that exhibit the wisdom of a man who stood the deck then had the intellectual depth to record these experiences in his own words for us. He left us an image of America that has passed to the ages. I knew Cap Way at the end of his life. By then he was bent over and small. His hands were twisted from arthritis. We talked of the usual things but he looked at me once, over his little reader glasses, his eyes kind of lit up and said to me quite out of context that I had a "part to play down the road". Now I think I understand what he had in mind and here is where the three threads come together to make a fine rope.

What many people might not realize is Blaser paints military art. One of his paintings  is on the most recent cover of the VVA Veteran Magazine. The magazine is a tribute to Vietnam Veterans.
Blaser’s work features Army General Creighton Abrams and Navy Admiral Elmo Zumwalt. They formed a coordinated effort to thwart the enemy along rivers in Vietnam. Blaser’s work has appeared twice on the Veteran Magazine cover. Michael served for two years in the Marines.

He also did a montage honoring  his high school friend Army Master Sergeant John F. Baker. Baker attended Moline High and received the Medal of Honor for his heroism during the Vietnam War.
Blaser also builds and paints model ships. He especially likes Navy ships because of how much they meant to our country’s success and survival.

An artist’s military salute! A tribute to the men and women who defend our freedom!
Posted by Ichabod the Glory Has Departed at 5:43 PM 0 comments


Virginia F. Moffitt, 91, of Milan, died peacefully Monday, Feb. 16, 2015, at the Clarissa C. Cook Hospice House, Bettendorf.
A memorial visitation will be 3 to 7 p.m. Friday at the Wheelan-Pressly Funeral Home, Milan. A memorial service will be held later this summer. Memorials may be made to the Reynolds United Methodist Church.
Virginia Burrill was born on March 20, 1923, in Alexis, one of four daughters born to Roe and Edith Sedwick Burrill. She met Merle Moffitt, and they were married on Sept. 1, 1948, in Viola. He died Dec. 17, 2009.
She worked as a school teacher at the Reynolds Grade School for a year and later at Coolidge Junior High School, Moline, where she taught social studies until 1951.
Virginia spent the next few years raising her children. She later returned to teaching and taught English at Moline High School, retiring in 1984.
Virginia was a member of the Reynolds United Methodist Church and the Order of the Eastern Star.
She is survived by her sons, Duane (Brenda) Moffitt, Milan, and David Moffitt, McCoy, Fla.; son-in-law, Bob (Karen) Brooks, Moline; her grandchildren, whom she loved, Sarah Brooks, Durango, Colo., Patrick (Casey) Brooks, Rossville, Ill., Andrea Moffitt, Moline, Jeff (Jen) Moffitt, Lynn Center, Karen Christiansen, Milan, Kevin Crowe, Moline, Gage Zvonik, Milan, Tiffani Branham, Silvis, and Justin Moffitt, Rock Island; and her many great-grandchildren, whom she enjoyed. She was preceded in death by her husband, Merle; and daughter, Dolores.


Online condolences may be left at wheelanpressly.com.
Posted by Ichabod the Glory Has Departed at 10:25 AM 0 comments 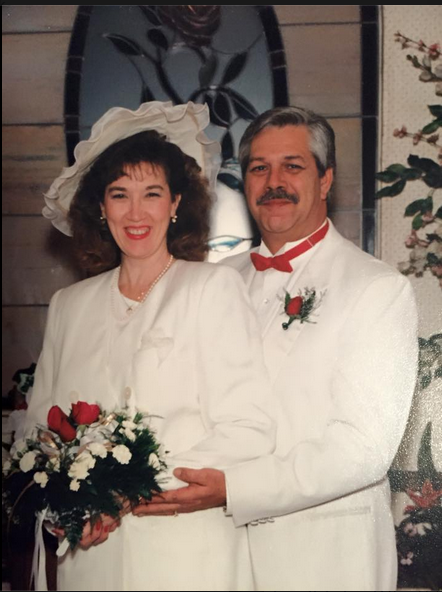 Happy 20th Anniversary, Josephine and Michael.
Posted by Ichabod the Glory Has Departed at 7:17 PM 0 comments

Posted by Ichabod the Glory Has Departed at 4:26 PM 0 comments

Email ThisBlogThis!Share to TwitterShare to FacebookShare to Pinterest
Labels: Abandoned in Hell

Colleen B. Wilcox Named to Moline High School Hall of Honor.
She Has Retired from Educational Leadership To Pursue Sculpting

Lou Quaintance is the MHS 66 sculptor.


Posted by Ichabod the Glory Has Departed at 6:38 PM 0 comments 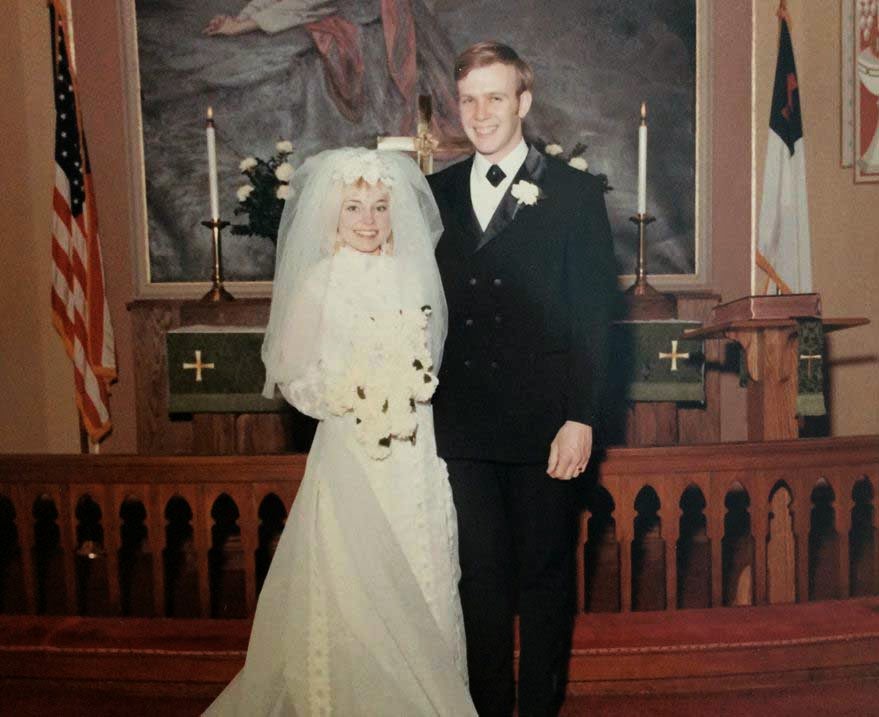 German blessing - "May every day be like your wedding day."
Posted by Ichabod the Glory Has Departed at 4:46 PM 0 comments