The Power of the Donut Shop 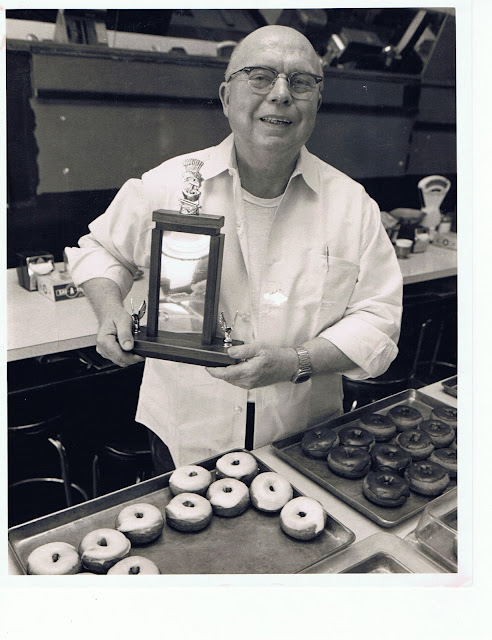 Homer Jackson was the shadow manager of WQUA AM radio.

"Your dad was known as WQUA's shadow program director.......all he had to do was make a comment to Verne Flambo and 24 hours later.....it was policy."
Posted by Ichabod the Glory Has Departed at 3:31 PM 0 comments 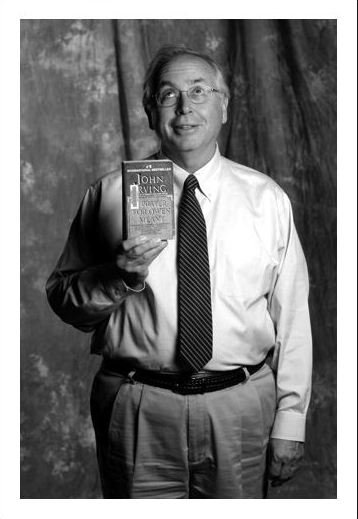 Jan McKenzie - For those of you who know Karl Huntoon, please take a minute to think of him today, and maybe say a prayer for him and his family. Today is his birthday. He went into hospice care about a week ago. The chemo and radiation didn't seem to help. This picture is from a 2007 project called My Favorite Book. ...It's Karl with "A Prayer for Owen Meany".
Posted by Ichabod the Glory Has Departed at 5:25 AM 0 comments 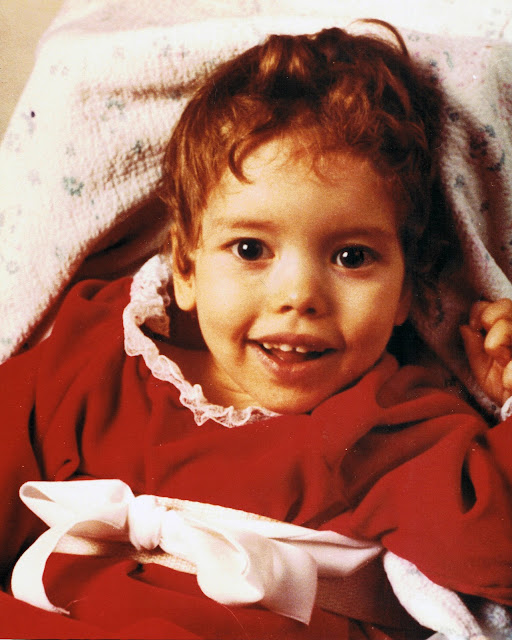 Bethany smiled for all her photos. 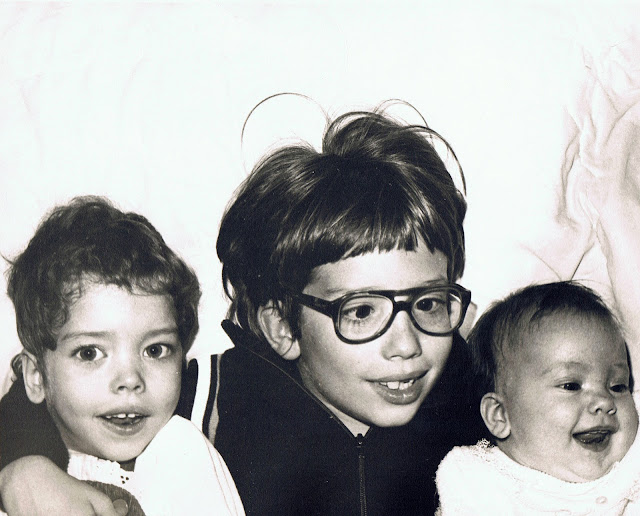 Martin held his two sisters at once, Bethany on the left, Erin Joy on the right. 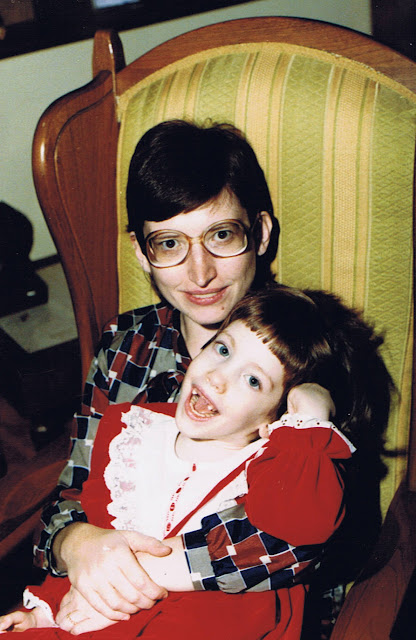 Chris posed with Erin Joy, who displayed the teeth we had to have removed because of involuntary grinding.
Erin Joy smiled immediately after the extractions.

Christmas reminds us of our losses. My wife and I will have a great time with Martin and Tammy's family, especially since we live only a few minutes away from them. Sometimes I imagine two other families that might have been there - Bethany's and Erin's.

Most of the time, I look back at those unique moments with our daughters. They were disabled by neurological degeneration, which made them progressively weaker. However, they were alert, smart, and eager to communicate with smiles, laughter, crying, pouting, and some deliberate actions. Muscle control was very difficult, but Erin could dig her nails into me to get attention and laugh at me for yelling "Ow, you did that on purpose." That was her Olympic gold medal, quite an accomplishment.

Bethany was once "disciplined" at school, put in the corner. She found a mirror and watched the class, smiling at outsmarting the teachers, who loved her cleverness.

My wife and I were talking about the Bethany/Erin effect on our lives. We had to battle for the most basic care for both of them. Medical insights were difficult to get across to the medical people, and the helping professions were often in the way, too.

We learned to enjoy the moments with all three children, even though they were tinged with sorrow, especially because we knew the inescapable facts. We still talk about how much fun it was to put Erin in a hammock and swing her around on her birthday.

Bethany laughed about spitting her least favorite food back at her nurse, and her nurse loved telling us. When I hear about the loss of a friend, I think about those moments.

I learned that a prominent Quad-Citian, Karl Huntoon, was taken to hospice care the other day. I only remember him as a student at Moline High. Like many others, I moved around the country and lost touch with many Moliners. Now I am in touch with classmates, some on a regular basis, through blogging and Facebook. I am in awe of the many accomplishments of my classmates, from rocket science to medicine to community service.

Blogging is a time warp machine. I look up the old photos and see my friends as they were in school. Now they are grandparents with grandchildren who look just like them. I see a FB photo and think, "That has to be Tim's grandson." Or "Three in a row - same blue dress!" (Kathy's clan), because grandmother, daughter, and granddaughter all posed in the same dress.

The best memories are those seemingly trivial events that grow in importance over the years. Eventually they dwarf everything else. The earthly treasures are nothing in comparison with the spiritual treasures of the Gospel. In fact, the birth of Christ was a trivial event for most people on earth. The day was unheralded, except for the shepherds. The politicians feared Him, but the Wise Men from the East came to observe the promised Savior, bringing gifts.

Holiday trips were difficult then, too. Going to Bethlehem was a long, tedious uphill climb. The inn had no room. The relatives failed to accommodate the Holy Family, who traveled incognito. No one important recognized their historic importance. A baby in a manger looks appealing now, but I do not know of any mother who wants to give birth in an animal shed and lay her firstborn in a feeding trough.

Luther had a humorous way of chiding his congregation. He said they would have gladly changed the diapers for Baby Jesus. He said, "Why not do it now? Serving your neighbor is doing the same for Jesus."
Posted by Ichabod the Glory Has Departed at 5:07 AM 1 comments

Help for Buying a Moline Yearbook

He's Doug Smith, which isn't much help, but he lives in Bettendorf. I'm emailing a photo I saved of him from the newspaper, and the newspaper article. Maybe you'll recognize him. It says he was 45 in 2004. Maybe from the info in the article (his job at Genesis?), someone can find a contact number. I don't know if he still sells on eBay or not. I did a quick check and couldn't find him.

Q-C man's hobby is one for the books
Posted Online: July 04, 2004, 12:00 am   Bookmark and Share
Comment on this story | Print this story | Email this story
By John Marx, jmarx@qconline.com

On one shelf sits a 1926 Dixon High School yearbook, and inside of it is a handwritten note from a 15-year-old sophomore everyone called "Dutch."

On another shelf rests an 1893 Iowa Hawkeye yearbook from State University of Iowa and a 1908 Davenport High School yearbook, believed to be the earliest of its kind locally.

In all, there are more than 3,000 yearbooks -- 1,000 of them from Quad-Cities area schools -- in the collection of Bettendorf's Doug Smith, a biomedical technician for Genesis Health Systems.

He also owns 10,000 records (45s and albums) and other collectibles, including a baseball autographed by Babe Ruth, which are tucked away in safe-deposit boxes. However, his yearbook collection is the 45-year-old's passion.

"My hope is people will come forward with more yearbooks and help provide more information," said Mr. Smith, who has gathered his collection from yearbook distributors, high schools and the Internet. "It's been an interesting journey. I'd love to write a book chronicling celebrities from the Quad-Cities, a sort of `then' and `what happened to' kind of book."

"I just called LeBron James' high school and asked to have a copy of their yearbook sent to me," Mr. Smith said. "They were out, but the distributor did sell me one. I thought it might be a good idea when it looked like he would become a star (in the NBA)."

"The note was to a classmate that he hoped to get to know better," Mr. Smith said.

"Finding famous Quad-Citians is what fuels my search," Mr. Smith said. "The project takes up part of every day, and I have never found it to be boring."

"That will happen," said Mr. Smith of "Collecting Yearbooks From the Quad-Cities ... And Who Interesting and Famous Can Be Found in Them." "But I'm not sure when it will be complete. I don't think the book will signal the end of my collecting yearbooks, because I'm having too much fun with it."
Posted by Ichabod the Glory Has Departed at 10:15 AM 0 comments 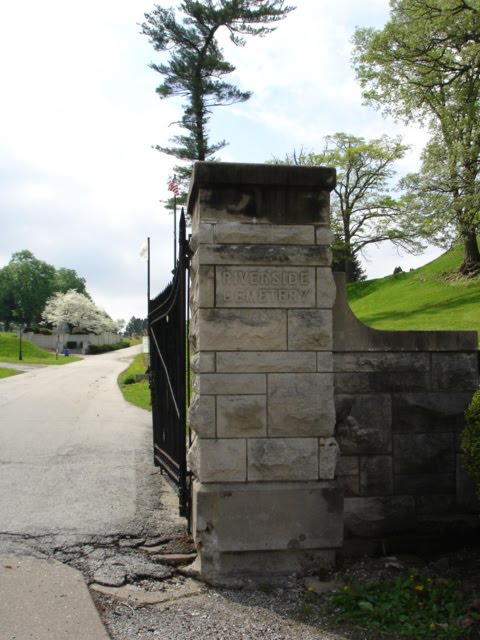 Heritage Documentaries, Inc.
www.heritagedocumentaries.org
Press Release: November 22, 2010
Announcing a book signing and sale:
Echoes From Riverside Cemetery: Moline, Illinois
***********
Monday Evening, December 6, 2010
5:00 - 7:00 p.m.
Lagomarcino’s Confectionery
1422 5th Avenue, Moline, Illinois
***********
Authors Kathleen Seusy, Diann Moore, Curtis C. Roseman, and Regena Schantz will be present to sign books, which sell for $20 each.
Echoes from Riverside is an innovative community history, telling carefully-documented stories of the lives of 109 people buried at Moline’s Riverside Cemetery. Included are people from diverse classes, ages, occupations, and backgrounds who were featured at twelve annual Echoes from Riverside cemetery walk events. Their stories open a dramatic window on the history of Moline.
The book also includes a history of the cemetery itself. The lower 1851 section is one of the earliest in the area and the upper 1872 expansion was designed by William Le Baron Jenney, widely known as the “father of the skyscraper.” Jenny’s design transformed the cemetery into picturesque burial grounds draped over the Mississippi River bluffs, offering visitors spectacular vistas of the river and its valley. The 270-page book includes hundreds of high-quality photos and other images that enhance the stories of the people featured. The book’s publication was made possible by a generous grant from the Moline Foundation.
For Further Information, Contact:
Curtis or Elizabeth Roseman    309 764 6122  or  croseman@usc.edu
Posted by Ichabod the Glory Has Departed at 9:03 PM 0 comments