Posted by Ichabod the Glory Has Departed at 3:57 AM 0 comments 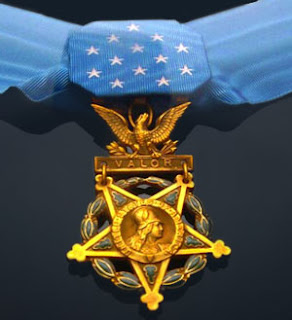 I sure hope it was enough.

We are now left to trust the love and admiration that were lavished upon Master Sgt. John F. Baker Jr. by his fellow veterans, laborers, police officers and firefighters, city, county and state officials, family, friends, strangers - that all of it was enough to make up for one deeply painful snub.

Baker, the Quad-Cities' only Medal of Honor recipient, passed away Friday. He was with his beloved wife, Donnell, near their home in Columbia, S.C., when his heart failed.

Born in Davenport and raised in Moline, Baker dropped out of Moline High School in 1965 to join the Army and go to Vietnam. He served with such distinction that 10,000 Quad-Citians turned out for a parade in Moline to welcome him home.

Sadly, a few decision-makers never forgave Baker for dropping out. When he was nominated in 2004 for Moline High School's Hall of Honor, he was rejected. Even though school officials had excitedly awarded him an honorary diploma upon his return from war, it wasn't good enough.

Gary Koeller, Moline's principal at the time, added that more than "just a single phenomenon" was expected of a Hall of Honor inductee. [GJ - Only 82 Medal of Honor winners are alive.]

But even before President Lyndon Johnson hung the Medal of Honor around Baker's neck for selflessly saving the lives of eight Americans, the 5-foot, 2-inch soldier was awarded the Bronze Star, Silver Star and Purple Heart. He completed 300 missions as a "tunnel rat," crawling through tunnels and planting explosives where the enemy traveled.

In 1989, Baker retired from the U.S. Army as a master sergeant after serving 24 years. After that, he went to work as a computer analyst for the Veterans Affairs hospital in Columbia, S.C., one of the largest VA hospitals in the country.

He long served as vice president of the Congressional Medal of Honor Society. And he was appointed by President George W. Bush in 2002 to serve on the National Cemetery Association's advisory committee on cemeteries and memorials.

He accepted invitations to speak at more than 1,000 public schools. The Interstate 280 Bridge was renamed Baker Bridge.

He was no one-hit wonder.

But the decision-makers at the high school refused to back off. One of Baker's former stepsons launched a relentless attack, claiming Baker was an alcoholic and was abusive to his mother after returning from Vietnam.

Even after an investigation by a retired FBI agent and a former member of the Secret Service revealed no such darkness in his past, school officials clung to their snubbing.

Ironically, the purpose of the Hall of Honor is: "To honor Moline High School alumni who have achieved distinction and positively influenced the lives of others."

Baker achieved the highest possible distinction in his field, and he positively influenced the eight American soldiers whose lives he saved.

I first met him for an interview at a picnic table at Middle Park in Bettendorf on a Sunday in July 2004.
I was taken at first by his slight build and wondered how he could have managed the enormously physical accomplishments that were attributed to him in the Medal of Honor citation. One of his sisters told how her big brother, "Johnny," used to run around the football field at the high school with dummies over his shoulders. He was training to be a gymnast.

Instead, he dropped out of school and went to war.

He admitted the slight from the high school hurt his feelings. He was confounded by how badly the committee got him wrong.

I wondered whether he got over it. I spoke to him a dozen more times over the years, and I was so touched when he sent me a Medal of Honor commemorative medallion last year. But I tried to avoid the topic of the Hall of Honor.

Bill Albracht, past president of Vietnam Veterans of America, Quad-Cities Chapter 299, was getting ready to leave for Baker's services at Arlington National Cemetery when I called him Tuesday.

He said a group of veterans had been working on a plan to ask the Moline High School Class of 2012 to "adopt" Baker, have him take part in graduation ceremonies and receive an actual diploma.

He agreed his friend was hurt by the high school's rejection. And he said he hasn't gotten over it, either: the Quad-Cities' greatest hero being told he was not good enough - that his name did not belong among a small collection of respected politicians, business people, actors and athletes.

"But he will rest in peace," Albracht assured, adding that plans are in the works for a local memorial service, complete with a 21-gun salute, taps and the entire veterans' community.

It was a glorious celebration, when Johnny came marching home to the Quad-Cities. It would seem a final salute from that Civil War anthem is in order.

As the lyrics go:

"And let each one perform some part,
"To fill with joy the warrior's heart."

Most of us, thankfully, leapt at the opportunity.


'via Blog this'
Posted by Ichabod the Glory Has Departed at 7:43 AM 0 comments


In this post, we return to America (now and again) and to Dwight Moody. I also hadn’t realised he had such an effect on Swedish pietists until I read David Gustafson’s book, D L Moody and Swedes, a thorough and fascinating examination of the subject. Dr Gustafson teaches at Linköping University in the Department of Arts and Sciences.

I shall briefly attempt to summarise key points of how important this episode of the late 19th century would be for both parties. (Page numbers indicated below are PDF pages and might not tie in with the printed page number.)


'via Blog this'
Posted by Ichabod the Glory Has Departed at 7:04 AM 0 comments


Although I plan to post on David Gustafson’s book on Moody and Swedish pietists (mentioned therein) early next week, it seemed apposite to explore the possibilities for their appetite for Anglo-American holiness.

A likely place to begin is with two men, Carl Olof Rosenius, Lutheran pietist and George Scott, an English Methodist.


'via Blog this'
Posted by Ichabod the Glory Has Departed at 6:54 AM 0 comments 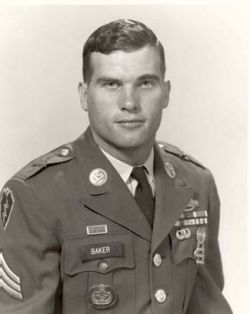 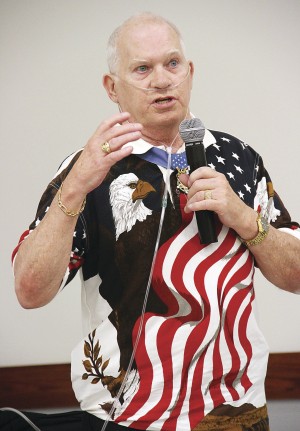 
John F. Baker Jr., a retired Army master sergeant who was awarded the Medal of Honor during the Vietnam War for rescuing wounded soldiers from an ambush and leading a daring counterassault, died Jan. 20 at a hospital in Columbia, S.C. He was 66.

He had a heart ailment, said his wife, Donnell Baker.

(AP WIREPHOTO) - President Lyndon B. Johnson presents Sgt. John F. Baker Jr. with the Medal of Honor at the White House on May 1, 1968.

Standing 5 feet 2 inches tall and weighing 105 pounds, Sgt. Baker made up for his diminutive stature by building up his physique. Inspired by his father’s work as a circus trapeze artist, he joined a gymnastics squad in high school and trained on the rings, learning to execute a perfect iron cross.

Accepted by the Army during the Vietnam War — the Marine Corps said he was an inch too short — Sgt. Baker’s impressive strength helped him save the lives of his fellow soldiers.

On Nov. 5, 1966, Sgt. Baker’s unit was tasked with reinforcing a group of American soldiers pinned down near Dau Tieng, close to the Cambodian border. About 3,000 Vietnamese had taken positions in the surrounding jungle, hiding in underground bunkers and roping themselves to tree branches.

As the U.S. soldiers advanced, the lead scout was shot in the face.

Sgt. Baker ran toward the front with another soldier and helped destroy two enemy bunkers. During the attack, the other soldier was mortally wounded. Sgt. Baker killed four enemy snipers before carrying his comrade away from the ambush.

Returning to the battle, Sgt. Baker was blown off his feet by an enemy grenade but recovered to make repeated trips through withering fire to evacuate wounded American soldiers much larger than himself. By the end of the two-hour conflict, Sgt. Baker’s uniform was soaked in the blood of his comrades.

In all, Sgt. Baker was credited with recovering eight fallen U.S. soldiers, destroying six bunkers and killing at least 10 enemies.

As his Medal of Honor nomination was considered, Sgt. Baker spent the rest of his tour as a “tunnel rat.” Armed with a flashlight and pistol, he explored the spider- and scorpion-infested subterranean network used by Viet Cong guerillas. During one mission, he discovered a full-scale hospital complete with surgical suites buried three stories below ground.

Returning home in August 1967, Sgt. Baker served as a drill instructor. One day, he was told he had an urgent phone call. It was President Lyndon B. Johnson on the line, inviting him to the White House to be awarded the Medal of Honor, the military’s highest decoration for valor.

According to his citation, “Sgt. Baker’s selfless heroism, indomitable fighting spirit, and extraordinary gallantry were directly responsible for saving the lives of several of his comrades, and inflicting serious damage on the enemy.”

Joining Sgt. Baker at the ceremony in the East Room was his company commander, then-Capt. Robert F. Foley, who also was awarded the Medal of Honor for bravery during the same battle that November day in 1966.

Foley, who retired from the Army as a lieutenant general in 2000, stood 6-foot-7 and played basketball at the U.S. Military Academy at West Point.

Noticing the soldiers’ disparate heights, Johnson told Sgt. Baker and Foley that they reminded him of the cartoon characters Mutt and Jeff.

After being awarded the Medal of Honor, Sgt. Baker traveled the country as a recruiter. His repeated requests to be sent back to Vietnam for combat duty were denied. He retired from the military in 1989 and later worked at a Department of Veterans Affairs hospital in Columbia, S.C.

His first marriage, to Ruth Ann Smith, ended in divorce. Survivors include his wife, Donnell Brazil Baker of Columbia; a son from his first marriage, John F. Baker III of Fort Myers, Fla.; and two grandchildren.


'via Blog this'
Posted by Ichabod the Glory Has Departed at 10:22 PM 1 comments

Use "shadowhog" when the order is ready to complete. It's a window at the the bottom of the order.

This is where the MHS 66 reunion book is found.
Posted by Ichabod the Glory Has Departed at 1:17 PM 0 comments