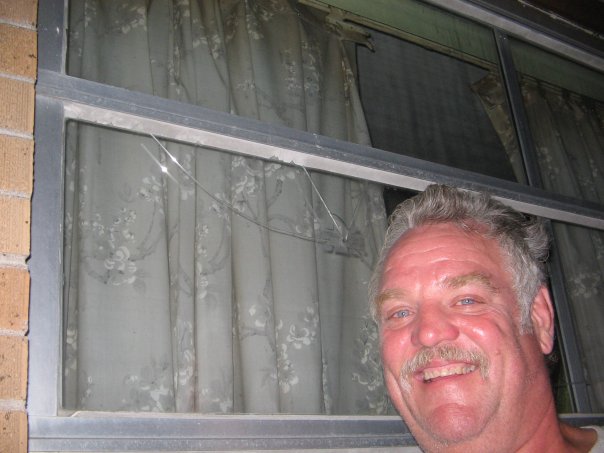 Mike broke this window as a child.
This is why it was never repaired...

In his own words:

"I was playing marbles with Jim Putnam and Harry Mahar on 11th Ave C when we decided to see who could throw a marble the farthest. My choice was over the house on 27th street facing 11th C. I was short.....I walked up to the guys house and knocked on the door to turn myself in, so to speak, and he didn't even know it had happened. He asked me what we should do and I told him to call my dad. After my dad showed up we went and bought a window and came back to replace it and the owner told us he wanted to do that himself and put the window in the garage. That was about 1960 I think.

Years later when I was living in Arizona , I was visiting and saw the man and his wife working in the front yard. I stopped and told him who I was and he and his wife got big smiles on their faces and he told me he never replaced the window because I had renewed his faith in the youth and wanted a reminder not to become angry over neighborhood kids anymore. He showed the window to his friends and church members and used it for a lesson/story. That was in 1976. I told him then it was time and I could do it for him and of course they wouldn't let me....

I was recently in the neighborhood with my son Joe, 12 years old, and told him the story, and then stopped to see if it was still broken."

Mike spotted neighbors of the original victim on this latest trip, who invited Mike and his son into their house for tea. They spent a long time talking about the neighborhood and the tale of the broken window.

Mike said, "It was a great trip and a chance to impart a little wisdom on my youngest son."

Drama and Communications
Mike was in theater as a child. Moline High classmates remember him in "The Importance of Being Earnest." He was also Von Trapp in "The Sound of Music."

He was also in Playcrafters and the Music Guild. He worked at the Apacheland Movie Ranch, doing stunt work and some small parts, including "one terrible B movie" he has not named.

Back in the Quad Cities he directed Crazy For You. He came down with Guillain-Barre, a neurological disorder causing extreme weakness, among other symptoms.

Car Restoration
Mike earned a communications degree while he was recovering from Guillain-Barre, graduating with honors from Illinois State, and did most of the master's program. That did not turn into a communications job, so he went back to car restoration work. Some of his work is pictured below.

Mike says:
"I did a 51 Frasier and a 36 Pierce Arrow before opening my own location. (photos of both of these are in my Facebook photos albums, I am currently working on a lounge interior in a 40's passenger train car and have a 68 Malibu to start on the end of February. I would like nothing more than to return to Moline, to do whatever work is available. I am hoping to get some more rod and classic interior work, but it is hard to do when out of that for so long." 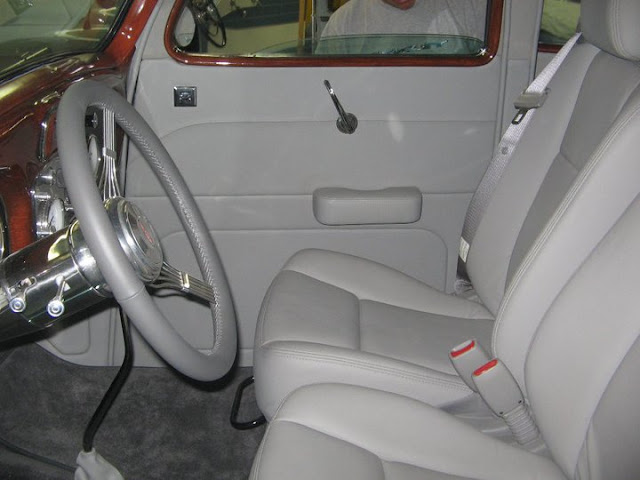 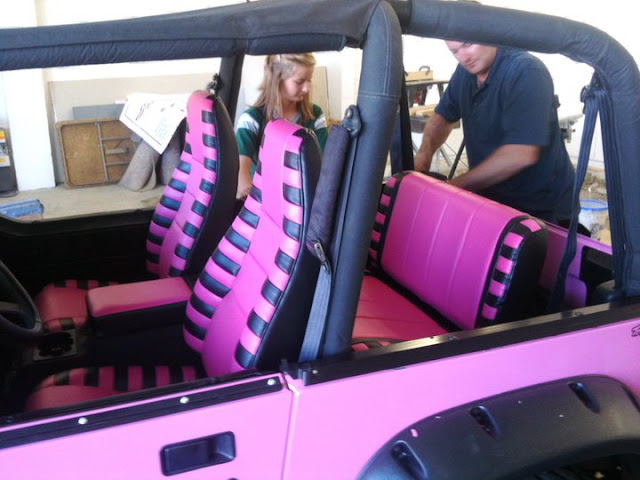 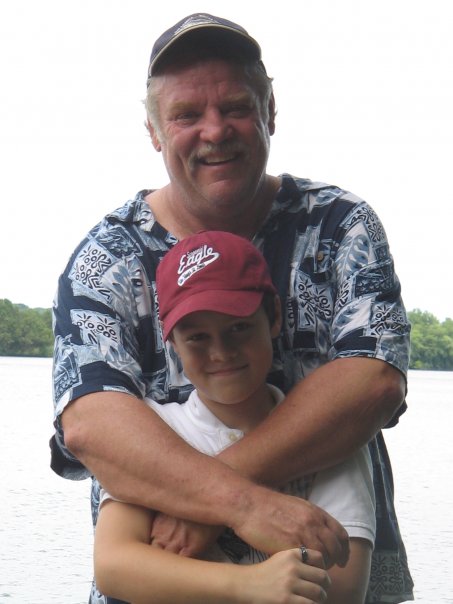 Mike and his son Joe enjoy time together.
Mike's favorite job is being a father.

Posted by Ichabod the Glory Has Departed at 5:14 AM 0 comments

I-280 Bridge Over the Mississippi River - Mary Parsons Caisley Photo 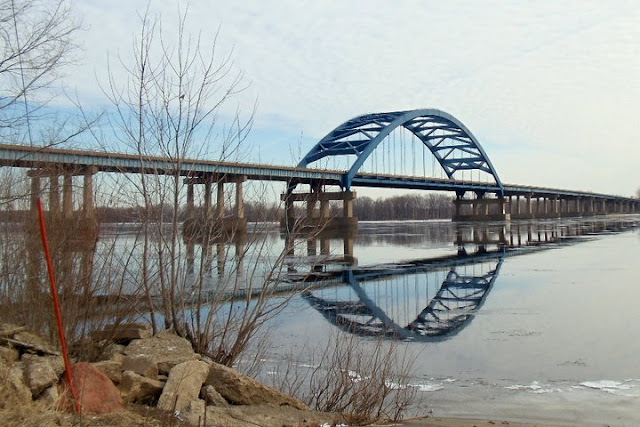 Posted by Ichabod the Glory Has Departed at 5:36 PM 0 comments

From CNN and Bernie Hanssen's tip

A big crowd of supporters, including his wife, Christie, kids, and the new Speaker of the House, Rep. John Boehner, came out to celebrate the ceremonial swearing in of Bobby Schilling (wearing a red tie) to Congress. By Catherine Clifford, staff reporterJanuary 5, 2011: 10:51 PM ET

WASHINGTON (CNNMoney) -- At the open house gathering to celebrate the official swearing in to Congress of Rep. Bobby Schilling in Washington, D.C., the pizza and ice cream were shipped in from Illinois.
The pizzas came in overnight from Saint Giuseppe's Heavenly Pizza, the shop that Bobby Schilling has owned for 14 years in Moline, Ill. Before deciding to run for Congress, Schilling was a pizza man. And lucky for supporters, there are pizza ovens in the historic D.C. office building, so the pizza was hot.

The ice cream, meanwhile, was shipped on dry ice from a local ice cream legend in Illinois, Whitey's. The owners of Whitey's Ice Cream weren't able to attend the party in D.C., but they wanted to show their support for Schilling on his big day.

For all of Congress, Wednesday was a big day. The 112th Congress was officially sworn in, giving Republicans a majority in the House, while Democrats maintained a slim majority in the Senate. Veteran Rep. John Boehner of Ohio took over the chamber from former House Speaker Nancy Pelosi.
But it was an especially big day for the Congressional first timers: Ninety-four new House members took office.

"It has been really, really busy," said Schilling, standing in the hall of the House, waiting to cast a rules vote about 4 p.m. But "I come from the restaurant business; you're talking to a guy used to working 12, 14 hours a day." When there isn't time for a meal, the pizza man resorts to energy bars: it "keeps you so you are not going to pass out," he said.

In addition to the official swearing-in ceremony, a family photo with fellow Republican Boehner to commemorate the day, and his first votes as a member of Congress, Schilling was meeting constituents and new colleagues, and being interviewed by reporters. And if there weren't enough cameras swarming Schilling, there were plenty of kids underfoot: He has ten. And his chief of staff has four, with a fifth on the way. There were kids all over the office, ranging from toddler age on up.

Schilling's son Levi, 18, said coming to D.C. for his father's swearing-in had been a "whirlwind." He flew in on Monday afternoon and the "first thing we did was come to check out my dad's office, that was pretty cool," he said. Since then, the family has been exploring the city from Chinatown to the central train hub, Union Station. The whole experience has been a little strange, though: "I have always known my dad as a pizza guy," said Levi.

With limited seating available in the chamber for the official swearing-in, supporters, friends and family watched two TV screens in Schilling's still-being-set-up office.

Friends and supporters Tim and Gin Wray drove 14 hours from Illinois with their 13-year-old daughter, Sierra, to be there for Schilling's big day. Gin went to high school with Schilling in Rock Island, Ill., and has been helping Schilling's campaign. She has a full time job as a landscaping manager, but helped out with everything from fundraising to watching kids if necessary.

"He is a family man, a business man," said Gin. "To help him get elected and to help him stay elected, I will do whatever he needs me to do."

For many newly elected members of Congress, having no experience in Washington was their ticket in.
"He is a fresh face. We share common ideology about the Constitution and limited government," said Caulkins, adding that Schilling is "very honest, open, and he is not a politician and not a lawyer."

Posted by Ichabod the Glory Has Departed at 7:53 AM 0 comments 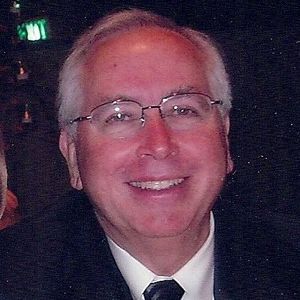 H. Karl Huntoon, 61, a proud Moline man who valued and worked tirelessly to improve the lives of his family, his friends, his clients, and his community, passed away January 1, 2011 at Trinity Pathway Hospice, Bettendorf, IA after a short battle with aggressive brain cancer.

A time to celebrate Karl’s life will be held Sunday January 9th, 2011 from 2:00 – 6:00 p.m. at the Moline Public Library. The family asks that in lieu of flowers, memorials may be made to the H. Karl Huntoon Memorial Fund, care of The Moline Foundation, 817 11th Avenue, Moline, IL 61265. This fund will be used to continue Karl’s efforts to continually improve the library and the community. Private family burial will be in Moline Memorial Park. Esterdahl Mortuary & Crematory, Ltd. Moline is assisting the family.

Karl was born December 19, 1949 in Davenport, IA to Harry Kline and Margit Anderson Huntoon. During the summer of 1970 he attended summer school at Dartmouth College where he met his wife of thirty eight years Andrea Dickgiesser. They were married July 29, 1972 in Woodbridge, CT.

He graduated from Moline Senior High School in 1968. He then attended the University of Illinois at Urbana-Champaign where he received a B.S. with honors in Economics in 1972. He then received a Juris Doctor Degree from the College of Law at the University of Illinois in 1975. He was accepted to the Illinois Bar Association on October 15, 1975 and the Iowa State Bar Association on August 19, 1992. He was also admitted to the US District Court, Central District of Illinois and the US Tax Court. Karl practiced law for thirty five years in Moline concluding at Katz, Huntoon and Fieweger.

During his undergraduate years he became very active in Delta Upsilon Fraternity. He continued to improve Delta Upsilon by serving the Alumni Corporation of the Illinois Alumni Chapter, becoming President and serving in that role until 1980. In 1981 he was elected to the DU International Fraternity’s Board of Directors serving various roles including Chairman of the Board from 1988 to 1991. He also received many fraternity awards and honors including the Outstanding Alumnus Award, and the prestigious Delta Upsilon Meritorious Service Award.

Karl improved his profession with involvement with the Rock Island County Bar Association serving as Secretary/Treasurer, Vice President, and President. He was an Assembly member from 1994 to 1999 for the Illinois State Bar Association and also served as a member of the Real Estate Section Council from 1992 to 1999. He had been a member of Quad City Estate Planning Council since 1992. Karl strived to improve the future by being an Instructor of Business at Augustana College and was awarded the Outstanding Teacher Award for 1979-1980 and 1980-1981.

First Congregational Church of Moline was improved by Karl’s time as he was a Sunday School teacher for many years. He also served on the Board of Trustees and was elected chairman.

One of Karl’s greatest gifts to the improvement of the community was his dedication of ten years on the Library Board which included the fundraising and construction of the new Moline Public Library that opened in 2006. He served on the Moline Police and Fire Commission and the Quad City Arts Board.

He is survived by his wife Andrea “Anne”; two sons who were honored to have him as their father James (Molly) Huntoon of Pawley’s Island, SC and Mark (Sabrina) Huntoon of Bettendorf, IA; three grandchildren he very much adored; a sister Elizabeth Huntoon of Chicago, IL; and a very dear friend Truman Symmonds who helped him tirelessly during his illness.

Online condolences may be expressed to Karl’s family by visiting his obituary at www.esterdahl.com.