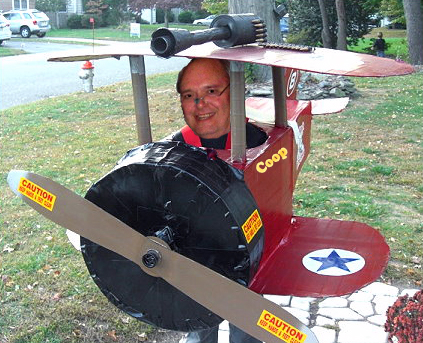 Coop showed an intense interest in aviation in childhood.

In 1922, a group of flying enthusiasts were so taken with the sky that they leased 30 acres of cow pasture south of Moline to preserve as a landing field.

An interesting look at the 109-year history of the airport has been brought to life in "Images of Aviation: Quad City International Airport,'' by local history expert and author Dave Coopman.

Mr. Coopman, a former teacher and past president of the Rock Island County Historical Society, is the author of two books about local radio stations and two books in the "Image of America'' series published by Arcadia Publishing.

A 1970 St. Ambrose College graduate, Mr. Coopman also spent 27 years in industrial sales and management. He admits having a huge fascination with aviation, a love that began as a child with bicycle trips to watch planes arrive and depart at the Moline Airport.

Because the airport had a huge hand in the growth of the community and a story to tell, Mr. Coopman took on the challenge.

"As I'd mention I was putting a book together on the airport's history, so many people would tell me they also used to go watch all the activity, and everyone mentioned the old observation area in the terminal,'' Mr. Coopman said.

"The airport had an interesting history -- started by men who became enamored with flying following WWI, became one of the earliest airmail stops, almost went broke several times, was saved from folding by its purchase by the city of Moline, was the second largest WPA project in the state and won a multi-year battle over Davenport on where the air-carrier airport would be located. The airport's history would make in interesting story I felt should be documented.''

The book is a collection of photographs and images of people, planes and events that transformed the former pasture into today's modern airport. Quad City International is the third largest airport for passenger traffic in the state of Illinois.

"Highlights include images of the earliest days of the airfield and early airplanes,'' Mr. Coopman said. "There are photos from the Moline stops of the National Air Tours in the 1920s, the construction projects that turned Franing Field into the Quad City Airport; and the overall growth of the airport.

"Photos from a 1940 air show and the 1954 dedication of the new terminal illustrate the crowds of people that were as curious as I was with aviation," he said. "The biggest hurdle was trying to compress nearly eight years of bickering between the Illinois and Iowa factions over the airport's location into about 260 words.''

Mr. Coopman said the undertaking was not a one-man project; many people helped bring the 128-page book -- with more than 200 images -- to life.

"So many people helped,'' he said. " Kris Streed Crawford, granddaughter of Richard Streed who was in business with Gus DeSchepper, one of the originators of the Moline airport, and daughter of Dr. Warren Streed, an early aviator and former airport commissioner, provided the historical library with articles and scrapbooks.

Mr. Coopman said the Quad-Cities is filled with interesting people and places to bring to life.

"There are so many interesting stories about people, places, businesses and events around the area, and I'm just curious by nature,'' he said.

"I enjoy finding out the story behind the story. Many younger people just don't realize what a historically rich area this is. Maybe, in some small way, I can help inform them.''
Posted by Ichabod the Glory Has Departed at 2:28 PM 0 comments