Julio Morales has left a new comment on your post "John Baker, Medal of Honor Recipient: Rest in Peac...":

John and I went through the Army Recruiting Course at Fort Benjamin Harrison, IN during the fall of 1972. We were the first group of recruiters sent to the field to recruit for the Volunteer Army... We had rough time trying to recruit young men, however, when the draft and the Vietnam conflict ended during the spring of 73, recruiting was easier... Today, I was thinking about whatever happened to John and found out he died in 1910. Rest in Peace brother. My deepest sympathy to his wife and family. 1SG (Ret) Julio Morales, USA (1959-1991)


For conspicuous gallantry and intrepidity in action at the risk of his life above and beyond the call of duty. En route to assist another unit that was engaged with the enemy, Company A came under intense enemy fire and the lead man was killed instantly. Sgt. Baker immediately moved to the head of the column and together with another soldier knocked out 2 enemy bunkers. When his comrade was mortally wounded, Sgt. Baker, spotting 4 Viet Cong snipers, killed all of them, evacuated the fallen soldier and returned to lead repeated assaults against the enemy positions, killing several more Viet Cong. Moving to attack 2 additional enemy bunkers, he and another soldier drew intense enemy fire and Sgt. Baker was blown from his feet by an enemy grenade. He quickly recovered and single-handedly destroyed 1 bunker before the other soldier was wounded. Seizing his fallen comrade's machine gun, Sgt. Baker charged through the deadly fusillade to silence the other bunker. He evacuated his comrade, replenished his ammunition and returned to the forefront to brave the enemy fire and continue the fight. When the forward element was ordered to withdraw, he carried 1 wounded man to the rear. As he returned to evacuate another soldier, he was taken under fire by snipers, but raced beyond the friendly troops to attack and kill the snipers. After evacuating the wounded man, he returned to cover the deployment of the unit. His ammunition now exhausted, he dragged 2 more of his fallen comrades to the rear. Sgt. Baker's selfless heroism, indomitable fighting spirit, and extraordinary gallantry were directly responsible for saving the lives of several of his comrades, and inflicting serious damage on the enemy. His acts were in keeping with the highest traditions of the U.S. Army and reflect great credit upon himself and the Armed Forces of his country. 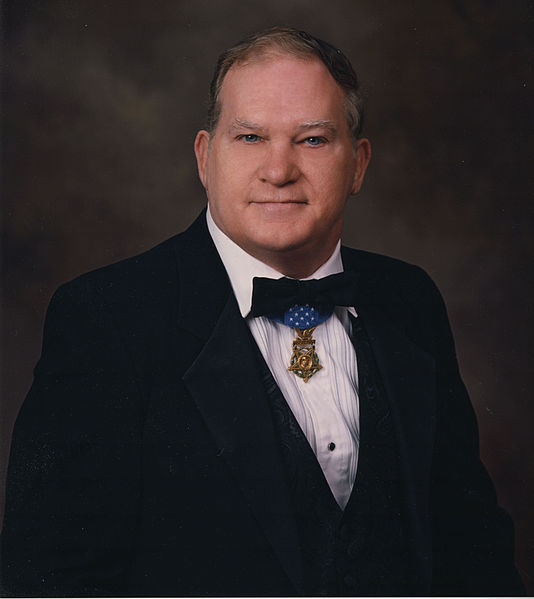 John Baker was born in Davenport, Iowa and attended Moline High School from 1963 to 1966. At 5’ 1”, he was a gymnast before joining the army. He became a "tunnel rat" in Vietnam, a soldier who entered Viet Cong tunnels searching out the enemy and destroying their caches of war material. Baker made the military his career, retiring in 1989. He then began working as a computer analyst at a Veterans Hospital in South Carolina. In addition to serving as the Vice-President of the Congressional Medal of Honor Society, he serves as a member on the Nation's Monuments and Cemeteries Committee.
In 2008, the I-280 Bridge, connecting Davenport, Iowa with Rock Island, Illinois, was renamed the Sergeant John F. Baker, Jr., Bridge in his honor.[1]

Baker entered the U.S. Army in Moline, Illinois, serving as a private in A Company, 2nd Battalion of the 27th Infantry, 25th Division. In Vietnam, Baker took part in Operation Attleboro which began in September 1966. On November 5, 1966, Baker and his unit were called to assist another squad who were taking enemy fire. En route, A Company began to take fire and lost their lead soldier. Together with two other soldiers, Baker took over the head of the column and assisted in destroying two enemy positions. They were moving to take two others when a hand grenade knocked Baker off of his feet.

Baker in uniform
With the two other soldiers wounded, Baker "single handedly" destroyed another bunker before recovering his comrades. Despite taking further fire from enemy bunkers and snipers, Baker continually fell back to replenish ammunition and take back several wounded. For these actions, he was awarded the Medal of Honor along with Captain Robert F. Foley, who also received the Medal of Honor for his actions in the battle. When awarded the citation, President Lyndon B Johnson stated:

Posted by Ichabod the Glory Has Departed at 2:20 PM