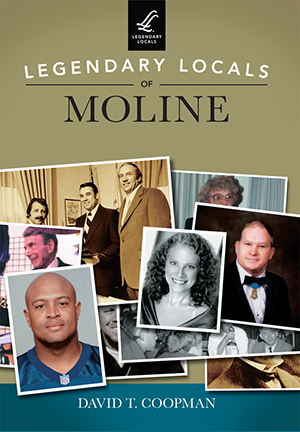 In his book, “WQUA, Moline's Hometown Station,” author Dave Coopman writes that the radio station flourished at 1230 on the AM dial under the ownership of G. LaVerne Flambo, above, a successful promoter of big-name entertainment shows and teen dances during the 1950s. The station launched or aided the careers of numerous on-air personalities, including some still familiar to Quad-City audiences such as William “Spike” O'Dell, Paula Sands and Jim Albracht.

Dave Coopman has tuned in his broadcasting background and love of local history to write another nostalgia-packed book about Quad-City radio.

His latest work explores WQUA, which was on the air from 1946 until 1983. Billed as “Moline’s Hometown Radio Station,” the pioneering rock ‘n’ roll music outlet, 1230 on the AM dial, was a proving ground for William “Spike” O’Dell, Paula Sands, Jim Albracht and many others who went on to broadcasting success.

“WQUA, Moline’s Hometown Station” is Coopman’s second book exploring the golden age of Quad-City radio. In 1998, he published “Someplace Special … KSTT: A History of the Station and its People,” a richly detailed look at the popular top-40 station of the 1960s and ‘70s.

Like “Someplace Special,” his book on WQUA brims with photos, promotional and advertising images, programming schedules, station logos and other graphics. The thorough and fact-laden account examines ownership and format changes, the comings and goings of announcers, and the station’s glory days under owner G. LaVerne Flambo, the impresario who brought big-name entertainers to the Quad-Cities and introduced the popular “Crocodile Club” teen dances of the 1950s,

A former Rock Island County Historical Society president who managed his college radio station and later worked as a broadcasting engineer, Coopman was encouraged to write “WQUA” by several former employees who also worked at KSTT. Published under the banner of Heritage Documentaries Inc., a local nonprofit organization with a goal of producing educational and historical projects, the indexed, 95-page, soft-cover book is available for $15 at the Rock Island County Historical Society in Moline.

KSTT and WQUA flourished in an era when Quad-City radio stations were operated by independent owners who had their offices on the premises, not by distant corporate chains as is the case today, Coopman said. “KSTT probably is better-known today, but WQUA was a good all-around station. And it also played rock ‘n’ roll before KSTT did,” he said.

Coopman, 60, graduated in 1970 from what was then St. Ambrose College in Davenport, where he managed the student radio station, KALA. He has worked as an engineer at several Quad-City radio and television stations, taught English at Moline High School and worked more than 20 years in sales management.

In piecing together the history of WQUA, he combed Broadcasting magazine yearbooks, Federal Communications Commission records, newspapers and other sources. He also interviewed many former employees and others associated with local radio.

WQUA signed on Sept. 23, 1946, from studios at 1319 5th Ave., Moline, and built a state-of-the-art studio at the northeast corner of 6th Avenue and 18th Street some 22 years later. The station was owned by the Moline Broadcasting Co., whose principals were broadcasting veteran Bruff Olin, Davenport industrialist G. Decker French and Davenport lawyer Howard Eckerman.

The station blossomed under “Vern” Flambo, who became general manager in 1950 and was owner from 1955 until 1960. Coopman writes that Flambo was “the man who put the Quad-Cities on the entertainment map with his big-name shows and promotions, and who took great pleasure in developing the talent of many young people in the broadcasting field.”

Announcers who honed their skills at WQUA over the years include Spike O’Dell, now a star and host of the morning-drive time slot at radio station WGN-AM in Chicago; Paula Sands, news anchor and host of “Paula Sands Live” on KWQC-TV; and Jim Albracht, who was sports director at WQAD-TV and later hosted a talk show on radio station WOC-AM for more than a decade while becoming the play-by-play announcer for the Quad-City Steamwheelers.

In addition to nurturing young broadcasters, WQUA attracted proven talent such as Jack Carey, whose “Coffee with Carey” was a hit show in the 1970s. Other veteran announcers recruited at WQUA included Adam Jones, host of the “All Night Fist Fight” during the 1960s and ‘70s, and Jim McShane, who became immensely popular with listeners and advertisers alike during the ‘70s.

After going through various format changes, WQUA dropped its identity in 1983 to become WMRZ , which featured hits from the 1950s and ‘60s. That format lasted until 1990, when the station became WLLR-AM. Today, it broadcasts sports talk and events as WFXN.

In an age of corporate ownership of radio stations and programming ruled by consultants, Coopman says WQUA is worth remembering. “Young people today ought to know what radio was like 30 years ago,” he adds.

Hours are 9 a.m. to 4 p.m. Wednesday through Saturday.

Source
Posted by Ichabod the Glory Has Departed at 4:59 PM